Goldman Sachs believes the U.S. economy will slow significantly in the second half of next year as the Federal Reserve continues to raise interest rates and the effects of the tax cut fade.

“Growth is likely to slow significantly next year, from a recent pace of 3.5 percent-plus to roughly our 1.75 percent estimate of potential by end-2019,” wrote Jan Hatzius, chief economist for the investment bank, in a note to clients on Sunday. “We expect tighter financial conditions and a fading fiscal stimulus to be the key drivers of the deceleration.” 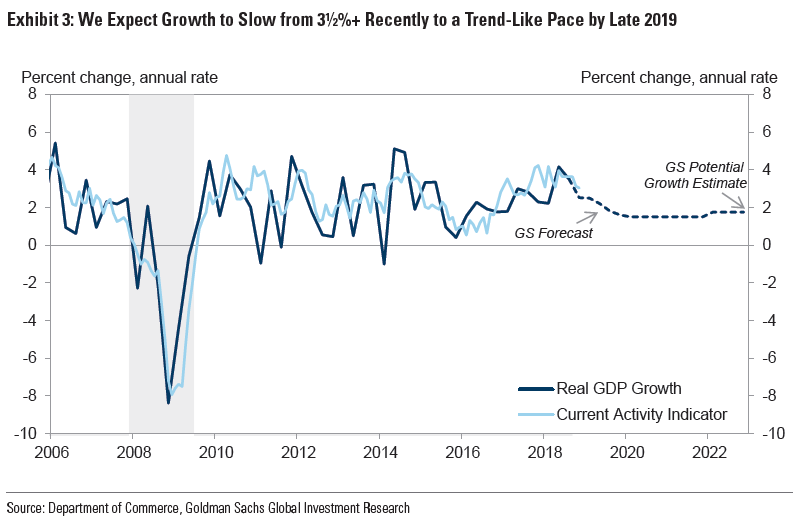 Goldman sees the Fed raising rates this December and then four more times in 2019. It will do so because inflation will reach 2.25 percent by the end of next year because of tariffs and increasing wages, the bank predicted, noting there was also a chance of an “inflation overshoot.”

“With a large overshoot of its labor market target under way, the FOMC will likely be reluctant to stop until it is confident that the unemployment rate is no longer on a downward trajectory, a point we expect to reach only in early 2020,” the note said.

“For now, neither overheating risks nor financial imbalances — the classic causes of US recessions — look worrisome,” Hatzius wrote. “As a result, the expansion is on course to become the longest in US history next year, and even in subsequent years recession is not our base case.”

— With reporting by CNBC’s Michael Bloom .

What Sellers Are Saying…

“Thank you for sending your letter. I didn’t know what I was going to do with this house since it wasn’t in any condition to list with a realtor.”

“Thanks for buying my Mother’s home. It was a big help that you were able to buy it without us having to clean it out and get it ready to sell. My mother had accumulated lots of stuff and after the stress of her long illness I was exhausted and I dreaded dealing with all of it. I also liked it that you gave me a very fair price for the home. I’m on a fixed income and that really helped a lot.”

“Thank you for making it simple to sell my parent’s home. Words can’t express how emotional it was having to sell the house I grew up in. Thank you for being patient with my sister and me, for making the process simple, and for making us a decent offer instead of lowballing us like a lot of the other people that sent us letters did. You helped make the best out of a really horrible experience without the high pressure that some of the other buyers put on us.”

“Dennis – thank you for helping us with our Mom’s home. This was a very traumatic experience for us, and we appreciated your patience with all the emotions we experienced during the process. You were really patient and understanding with us during the sale process, and we’re sure that Mom’s home will be in good hands. God Bless.”

“Mr. Fassett – thank you for working with us to buy my Mom’s home after she passed away. When you mentioned that you would give us an offer within 24 hours and then close quickly I didn’t really believe that we would have the house sold in only 2 weeks. I’m glad I found you.”

“Thanks for buying my Mom’s house. I didn’t know what to do after three real estate agents told me they wouldn’t list it in the condition it was in. I appreciate you being flexible with me and giving me time to remove the pictures and other valuables that my Mom had. Thanks also for not pressuring me to sell like some of the other guys that sent letters. The process was stressful enough without being pressured to sign a contract.”